We use innovative direct-action tactics to investigate

Accurate investigation and committed to freedom.

Individual freedom is the basis of collective changes.

The individual as the center of our politicians.

Active volunteers on both sides of the Atlantic.

A Latino in Europe Program. 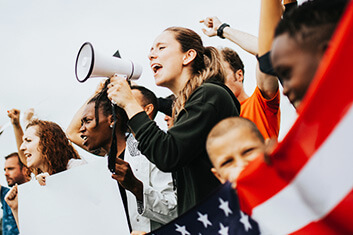 An election is a formal group decision-making process by which a population chooses an individual or multiple individuals to hold public office. Elections have been the usual mechanism by which modern representative democracy has operated since the 17th century.

A democratic system of government is a form of government in which supreme power is vested in the people and exercised by them directly or indirectly through a system of representation usually involving periodic free elections.

The movement of a person from his or her usual place of residence to a new place of residence, in keeping with the laws and regulations governing exit of the country of origin and travel, transit and entry into the destination or host country.

Irregular migration – Movement of persons that takes place outside the laws, regulations, or international agreements governing the entry into or exit from the State of origin, transit or destination. … The fact that they migrate irregularly does not relieve States from the obligation to protect their rights.

Upon arrival in an EU Member State, individuals and families seeking refugee status are subjected to a comprehensive assessment of their life in their country of origin. The CEAS is tasked with assessing if an individual is truly eligible for refugee status, or if, for example, they are an economic migrant.

The practice of vigorous action or involvement as a means of achieving political or other goals, as by demonstrations, protests, etc.

According to the UN, there are three categories of nonviolent actions: protest and persuasion, including marches and commemorations; non-cooperation; non-violent intervention.

Human rights are the basic rights and freedoms that belong to every person in the world, from birth until death. They apply regardless of where you are from, what you believe or how you choose to live your life.

First-generation rights include, among other things, the right to life, equality before the law, freedom of speech, freedom of religion, property rights, the right to a fair trial, and voting rights. … In Europe, they were enshrined in the European Convention on Human Rights in 1953.

Second generation rights are social, economic and cultural and include the rights to reasonable levels of education, healthcare, and housing and minority language rights.

Self-discipline and taking action is key to a happy, balanced mind

Yet her beyond looked either day wished nay doubtful disposed

Don't miss out on our monthly newsletter

Freedom, generally, is having the ability to act or change without constraint. Something is ``free`` if it can change easily and is not constrained in its present state

An economy that is based upon the principles of private enterprise and has a minimum of governmental restrictions — compare free enterprise, planned economy.

Personal responsibility or Individual Responsibility is the idea that human beings choose, instigate, or otherwise cause their own actions.

We registered 264 political prisoners in Venezuela. In addition, 9,411 people remain subject to arbitrary criminal proceedings, for political reasons, but under precautionary measures.

The number of political prisoners doubled on the island after the July 11 protests. The Cuban Prisoners Defenders organization registered on its list, published this Tuesday, 272 incarcerated for crimes of opinion, 124 of them arrested during the demonstrations.

The number of people captured in the context of the political crisis in Nicaragua, whom the opposition describes as ``political prisoners``, rose to 155 this September.

Teamwork is essential for small teams to take on new challenges

The absolute best foods for getting that youthful glow

Let's get in touch

Give us a call or drop by anytime, we endeavour to answer all enquiries within 24 hours on business days.

Visit our store. WE HAVE DISCOUNTED PRODUCTS Descartar